Dermatitis herpetiformis, often referred to as ‘DH’, is a skin condition linked to coeliac disease.

DH affects fewer people than typical coeliac disease, at around one in 3,300 people. It can appear at any age, but is most commonly diagnosed in those aged between 50 and 69 years.

The rash is most commonly seen on the elbows, knees and buttocks, but any area of the skin can be affected. The rash usually occurs symmetrically on the body, for example on both elbows. 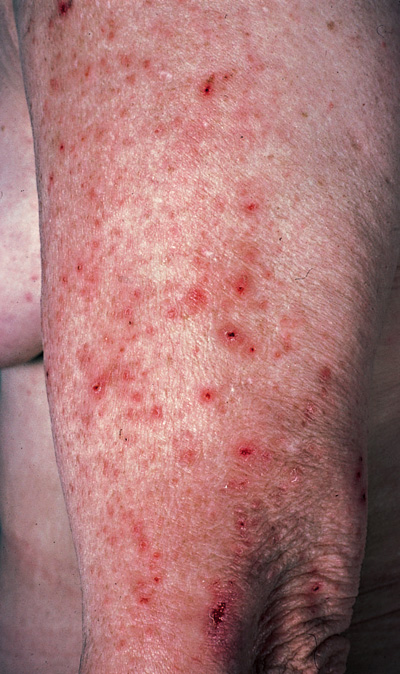 Diagnosis of DH is confirmed by a simple test called a skin biopsy.

A dermatologist will take a small sample of skin from an area without the rash. This is important because if the biopsy is taken from the area with the rash, it doesn't always give the right result.

This skin sample is checked to see if you have an antibody known as Immunoglobulin A (IgA).

If the antibody is found, the skin biopsy is positive and you should be referred to a gastroenterologist who will test you for coeliac disease using antibody blood tests and a gut biopsy.

At least 60% of people with DH do not have gut symptoms such as diarrhoea, constipation, stomach pain or bloating, most of them do have the same kind of gut damage that is seen with coeliac disease.

To make sure you get an accurate test result first time, it’s important to keep eating gluten until you have the antibody blood tests and biopsy. If you have already taken gluten out of your diet, you must reintroduce gluten in more than one meal every day for at least six weeks before you have the tests.

The treatment for DH is a lifelong gluten free diet. This means you will have to remove all sources of gluten, which is found in wheat, barley and rye, from your diet. Some people may also be sensitive to oats.

The time it takes for the skin rash to improve varies between people. Skin symptoms tend to take longer to recover compared to the typical gut symptoms associated with coeliac disease. It can take an average of two years for a gluten free diet to take full effect, and in some cases longer.

As it can take a long time for a gluten free diet to take effect, you may also need drug treatment to help control the rash to begin with.

The most common drug prescribed for DH is dapsone. This is a tablet medication that needs to be swallowed, rather than a cream. Dapsone will help control the itching and development of blisters. It works within days, although the rash will come back if you stop taking it before the gluten free diet has taken effect.

It is important to find the lowest effective dose of the drug because there are side effects. The most common side effect is anaemia and your doctor may check for this on a regular basis. Less common side effects include headache, depression and damage to nerves, although this is rare.

DH should be monitored once the drug dose is reduced. Using medications such as dapsone will not make the gut damage seen in coeliac disease worse.

For those who cannot tolerate dapsone, there are two other drugs which also clear the rash – sulphapyridine and sulphamethoxypyridazine.

Drug treatment will only control the skin itching and blisters. It will not treat any other symptoms, so a gluten free diet is an essential part of the treatment of DH, as it is for anyone with coeliac disease.

The same associated conditions and complications can occur in people with DH as in people with coeliac disease. These include osteoporosis, certain kinds of gut cancer and an increased risk of other autoimmune diseases such as Type 1 diabetes and thyroid disease.

As in typical coeliac disease, the risk of developing these complications is reduced if the gluten free diet is followed.