With a prevalence of 1 in 100, hundreds of thousands of people in the UK have coeliac disease. But there are half a million who don't know it and may still be struggling with unexplained symptoms. Could you be one of them? Read on to find out more about coeliac disease, or go straight to our online assessment to check your symptoms.

What is coeliac disease?

Coeliac disease (pronounced see-liac and spelled celiac in other countries) is a serious illness where the body’s immune system attacks its own tissues when you eat gluten. This causes damage to the lining of the gut and means the body can’t properly absorb nutrients from food. Coeliac disease is not an allergy or food intolerance.

How common is it? 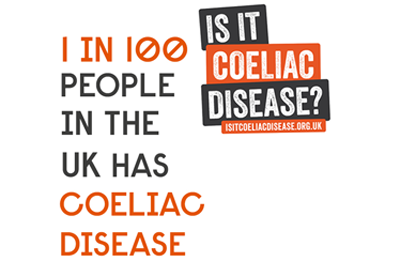 Coeliac disease is common and affects 1 in 100 people. However only 36% who have the condition have been diagnosed which means there are currently nearly half a million people who have coeliac disease but don’t yet know.
If a first degree family member (such as mother, father, sister or brother) has the condition then the chances of having it increase to one in ten.

Research is currently underway to find out more about the genes behind coeliac disease and how more knowledge could help us stop the condition in its tracks. Read more in our research section.

How to know if you have coeliac disease

Coeliac disease has a wide range of symptoms so check below or complete our online assessment.

Symptoms range from mild to severe, and can include bloating, diarrhoea, nausea, wind, constipation, tiredness, mouth ulcers, sudden or unexpected weight loss (but not in all cases), and anaemia.

"I suffered with terrible tummy problems before I was diagnosed. My stomach was crampy and painful every time I ate and I was so bloated I looked six months pregnant."

Because of the way that coeliac disease can affect the gut, it's frequently misdiagnosed as IBS.

If you think you could have coeliac disease, take our online assessment at isitcoeliacdisease.org.uk.

To help you understand coeliac disease and the steps involved in diagnosis, we have developed a short animation to explain the symptoms, diagnosis and treatment. It is available in English, Welsh, Arabic, Bengali, Polish, Punjabi and Urdu.

What is the treatment for coeliac disease?

Once diagnosed, the only treatment for coeliac disease is a gluten free diet. Gluten is found in wheat, barley and rye. Some people are also sensitive to oats. Once gluten is removed from the diet, you should start to feel much better.

What is dermatitis herpetiformis?

Dermatitis herpetiformis (DH) is the skin manifestation of coeliac disease which occurs as a rash that commonly occurs on the elbows, knees, shoulders, buttocks and face, with red, raised patches often with blisters. It affects around one in 3,300 people.

If you think you have DH you may be referred to a dermatologist as well as for a gut biopsy. While waiting for the gluten free diet to take effect, you could be prescribed medication like Dapsone to keep the rash under control.