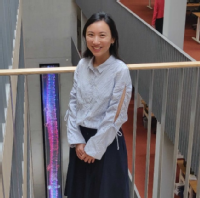 My name is Chan Li. I am working as a postdoc researcher in the Genetics Department of the University Medical Centre, Groningen, Netherlands. I obtained my PhD degree in biochemistry and molecular biology from Peking University, China. During my PhD study, we pioneers in China, were the first to apply a genome scale CRISPR/Cas9  perturbation to understand the mechanism of genes involved in infectious diseases.

Currently, my research interest focuses on unravelling the causal genes for complex autoimmune diseases such as coeliac disease. I use the most advanced techniques currently available for example, the CRISPR/Cas9 perturbation together with single cell RNAseq technology. My hope is that identifying causal genes other than HLA DQ2/8 will help us not only understand the complete mechanism of coeliac disease but also aid the development of new treatments for people with the condition.

More than 100 causal genes associated with coeliac disease have been identified. However, little is known about which genes are the true causal ones, or how they contribute to disease development. A recent, commonly accepted, proposed explanation is that if a gene or gene set is known to cause a specific disease or disease symptoms, these genes will often have similar functions or be involved in the same biological process. This suggests that the majority of the genes causal for coeliac disease should be involved in the same gene regulatory network, and it is through this pathway that they play a role in causing the disease.

I aim to utilise a high throughput technology called CROP-seq to build up the causal gene regulatory network for coeliac disease. With this method, we can analyse the functions of hundreds of genes at the same time. The underlying mechanism of this methodology is that genes in the same network will have a tendency to be co-regulated. With this knowledge we can prioritise the causal genes that have bigger effects and even discover novel disease genes within the same network, which may represent new treatment targets.