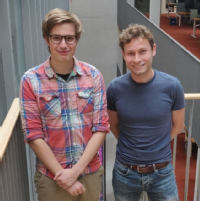 We are Roeland Broekema (29) and Olivier Bakker (23), two PhD students working in the Department of Genetics of the University hospital in Groningen, the Netherlands. Together we are working to improve the resolution at which we can pin-point the DNA building blocks that contribute to coeliac disease. Roeland works in the laboratory performing experiments with human cells, and the large genetic data set he is generating will need to be analysed in the near future. This is where Olivier comes in. He will take the data set and use his computer expertise to analyse the differences in the thousands of DNA building blocks. Together we will then interpret the data and write a research paper about our findings. Allow us to introduce and explain exactly what we are working on.

Previous research comparing 12,000 people with coeliac disease with 12,000 healthy individuals identified general regions within our DNA that likely contain the genetic causes and characteristics of coeliac disease. This method of comparing the DNA of different groups of people is called a genome-wide association study (GWAS). This is quite an extraordinary feat when we realise that our DNA consists of around three billion building blocks (nucleotides). Although it is impossible to see DNA with the naked eye, the most impressive way to imagine DNA is a chain of three billion Lego blocks of four different colours in a seemingly random order. Within our DNA, only a few per cent of our building blocks correspond to about 20,000 genes. The combined activity of all genes decides how each cell in our body functions, and therefore also how we respond to gluten (for example).

The coeliac disease GWAS identified over 40 regions within our DNA that are associated with having coeliac disease. However, due to the sheer size of the human genome and the way heritability works, the resolution by which we can currently identify each of these DNA regions is very limited. Thus, each of these DNA regions is broadly defined by about 50,000-500,000 DNA building blocks, which means there are thousands of genes located within or near the 40 coeliac DNA regions. As you can imagine, we need much better resolution to pinpoint the exact building blocks and genes that contribute to coeliac disease. Therefore, we are applying a method to further reduce each DNA region down to one, or a few, building blocks.

The method we are using is called Survey of Regulatory Elements and SNPs (SuRE-SNP). SuRE-SNP allows us to detect small DNA regions outside of genes (called “regulatory elements”) that control the activity of genes. Here we are particularly looking for common variation between individuals that can affect the activity of genes. These common variations are called SNPs (single nucleotide polymorphisms), single DNA building blocks that can differ between individuals. Therefore, by applying SuRE-SNP we can pinpoint single DNA building blocks that will help us identify the causal genes in coeliac disease development.

But why is it important to identify the causal DNA building blocks and genes? Knowing the exact DNA building blocks that link to disease means we can more accurately determine each person’s risk of developing coeliac disease, which will allow for quicker and more accurate diagnoses. As for the genes themselves, they are translated into proteins that have an individual function in our cells. But these proteins also work together in what we call biological pathways to allow our cells to perform complex tasks such as recognising viral particles and initiating an immune response. In the case of coeliac disease, an unwanted immune response is being generated to gluten particles. If we know the exact genes and gene pathways involved in coeliac disease, we can determine possible drug targets that can alleviate or even cure disease symptoms by targeting a specific protein that is part of the associated pathways.

Although we believe SuRE-SNP, and other methods applied by our colleagues, will advance our understanding of coeliac disease tremendously, we first need to be entirely certain that we have found the correct causal building blocks and genes that lead to the development of coeliac disease. It may take another two or more decades before we can actually start thinking about possible treatment options, based on our research, but we’re heading in the right direction!