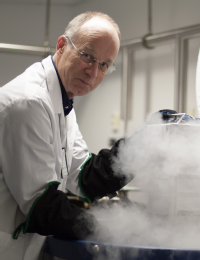 Hello, my name is Ludvig Sollid and I am a medical doctor and immunologist working in Oslo, Norway. I am the Director of the KG Jebsen Coeliac Disease Research Centre (JCoDiRC). Three and a half years ago, we received funding from the Norwegian foundation, Stiftelsen Kristian Gerhard Jebsen, to form a translational research centre on coeliac disease. We are delighted to announce that we have just been granted funding for a two year extension which will allow us  to bring some of our basic research findings on coeliac disease to the benefit of patients.

The JCoDiRC consists of five research groups. One of which you have already met last year, that is the group of geneticist Cisca Wijmenga, based in Groningen, the Netherlands, now headed by Iris Jonkers and Sebo Withoff. The other group leaders are:

Every day next week you will have the opportunity to learn more about the research from all these groups at the JCoDiRC in Oslo.

The immune system and coeliac disease

Immunology is about the body’s defense system that protects us against intruders like viruses and bacteria. Immunology is a central part of coeliac disease. The disease will develop when a person’s immune system treats gluten as an intruder which the body needs to protect itself against. Thus, coeliac disease will occur when an inappropriate and harmful immune response to gluten is mounted. 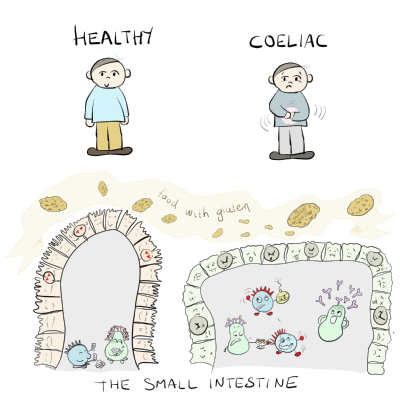 People who respond to gluten in this way have in common certain variants of HLA-DQ molecules. Which HLA variant a person carries is genetically determined. You will inherit your variants from your parents. HLA molecules are central players in the immune system. The HLA molecules present fragments of proteins (known as peptides) from virus and bacteria to immune cells called T cells.

The HLA-DQ variants (DQ2 and DQ8) that people with coeliac disease have in common have the unique ability to bind and present gluten peptides to T cells. This initiates a cascade of events that eventually gives damage to the lining  of the gut – “BANG” - coeliac disease is established.

Can we cure coeliac disease?

My laboratory was central in the identification of the HLA molecules found in people with coeliac disease. We identified that the HLA-DQ2 and HLA-DQ8 molecules uniquely bind gluten peptides and we also worked out  that T cells can recognise gluten peptides when they are attached to these HLA-DQ molecules. More recently, we have also identified the sequences of many of the gluten peptides that are harmful to people with coeliac disease. Over the last decade, we have discovered a number of things about the gluten specific T cells that has made us realise just how special these cells are, and that perhaps we can cure coeliac disease if we can eliminate these cells.

B cells – what are they? 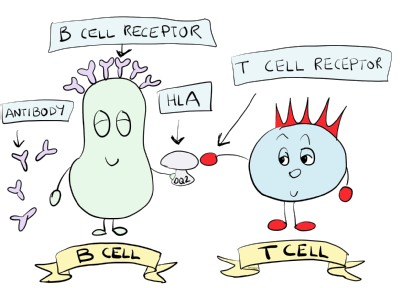 In recent years, we have also worked on another important type of immune cell called B cells. B cells have surface molecules called B cell receptors that can also recognise proteins or other molecules (known as antigens). The B cell receptor is an antibody bound to the cell surface of the B cell.

One B cell can only recognise one antigen. When a B cell binds its antigen, it must talk to a T cell. If a B cell and T cell talk together, the B cell will change and start to produce and give off antibodies. These antibodies float around between cells and in the blood.

Coeliac disease is an autoimmune disease

When the immune system starts to attack the body itself like this, we call it autoimmunity. Coeliac disease is therefore not only a food intolerance, it is also an autoimmune disease. Much of the work in my group now focuses to understand why the immune system of people with coeliac disease starts to attack the body itself. We are especially looking at how T and B cells talk to each other..

Almost all the research we do here in Oslo revolves around the disease specific T and B cells. Next week you will meet some of our researchers that work with these cells. The cells we study come from blood or gut biopsies from people with coeliac disease. You will meet gastroenterologist Knut Lundin and learn how patients with coeliac disease contribute to and participate in our research.

On Monday you will meet Asbjørn Christophersen and Louise Fremgaard Risnes who study gluten specific T cells. In my laboratory we have developed a very handy tool called HLA-DQ:gluten tetramers. T cells can recognise many different foreign substances and therefore many, many different T cells exist in the body.

B cells and antibodies

On Wednesday you will learn about how we study T cell receptors (TCRs) to detect the presence of coeliac disease and how we think this could be used for diagnosis in the future. We have found that many people with coeliac disease share the same gluten specific TCRs. It may be possible to develop a test for diagnosing coeliac disease that will not require a biopsy or the need for patients to eat ongoing amounts of gluten. You will meet Shuo-Wang Qiao, Shiva Dahal-Koirala and Geir Kjetil Sandve who are working in this area.

Researchers at JCoDiRC are also involved in testing new drugs that we hope in the future will partly or fully replace the gluten free diet as the treatment for coeliac disease. This work is led by gastroenterologist, Knut Lundin, and on Thursday he will tell you about our current activities and the patient involvement. You will also meet Stephanie Zühlke who studies how gluten specific T cells behave in the blood when people with coeliac disease, who are on a gluten free diet, start to eat gluten again. Jorunn Stamnæs will also share her work exploring a method to detect changes in gut biopsies that are impossible to see under the microscope. Both these projects may provide a way to monitor exposure to gluten or the effects of a new drug treatment.

Research really does and will continue to make a difference

Based on the work we and other scientists have done over the last couple of decades, we now have greater insight into what goes wrong in coeliac disease, in far more detail than for most other autoimmune diseases. I think many people will agree with me when I say that coeliac disease is a condition that demonstrates very well, how much can be achieved by research. Research indeed makes a difference!