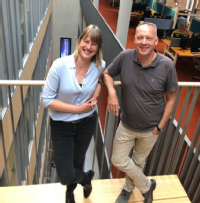 Hi! We are Iris Jonkers and Sebo Withoff, principal scientific investigators in the Genetics Department of the University Hospital in Groningen, the Netherlands. Together with an excellent group of technicians, doctors, PhD students and postdocs, we are working to try to understand how our genetic code—our DNA—contributes to our risk of developing coeliac disease and the issues that follow.

Our department has a long history of genetic research into coeliac disease, which was spearheaded by Cisca Wijmenga. She and her team performed the first large genetic screen in  patients with coeliac disease and identified regions in our genetic code that are more often present in people with the condition and therefore linked to coeliac disease. Now we are trying to understand more precisely how these regions play a role using several different approaches.

Pinpointing the precise genetic building blocks in the regions linked to coeliac disease will make it easier to use the genetic code as a diagnostic tool and to better predict which genes play a role in the disease. However, this is not an easy task. There are over three billion building blocks in our DNA, and thousands of these may play a direct role in coeliac disease. Identifying which ones and their specific effects is the research area of Roeland Broekema and Olivier Bakker. They use large genetic screens to pinpoint the exact building blocks that play a role.

While many genes linked to coeliac disease seem to play a role in immune and inflammation processes, we have also identified genes that seem to play a role in the small intestine itself. We think that these genes make the gut of a person with coeliac disease more sensitive to gluten peptides, allowing them to more easily penetrate the gut barrier and trigger inflammation. For now, this is mainly a proposed explanation ie a hypothesis and we are working hard to prove this. In order to do so, we need a good model system that reflects the small intestinal barrier of a person with coeliac disease as accurately as possible. Renee Moerkens and Joram Mooiweer are working hard to make such a model and are generating a miniature living ‘gut-on-a-chip’ from cells of coeliac patients. We are really excited about this, even to us it seems almost science fiction!

Finally, it is not only genes but also factors in our environment that may play a role in coeliac disease. One of these environmental factors is the bacteria that live in our gut, our microbiome. Jelle Slager is exploring the microbiome in faecal samples donated by people with coeliac disease, living in the Netherlands. Jelle is looking to see if there are unique bacteria that may cause or worsen coeliac disease. Next, he will try to grow these bacteria in the lab and introduce them into the ‘gut-on-a-chip’ so that we can see how the bacteria may change the intestine.

This work could not be done without the financial support of the Dutch Research Council, the European Research Council, Stiftelsen KG Jebsen and the Netherlands Organ on Chip Initiative. But, most of all, we are extremely grateful for the help of the many people with coeliac disease who have donated samples of their faeces, blood and intestine, as well as their time and enthusiasm.