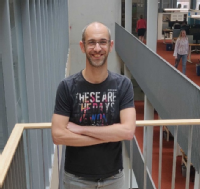 My name is Jelle Slager, I’m a postdoctoral researcher in the Genetics Department of the University Medical Centre, Groningen, the Netherlands. My research project focuses on studying the role of gut bacteria—the gut microbiome—in coeliac disease. As a member of the Netherlands Organ-on-Chip Initiative (NOCI), I will be using Gut-on-Chip technology to study the interaction between human intestinal cells and the microbiome.

Let me start by explaining why we think the microbiome may have a part to play in the onset of coeliac disease. A number of genetic factors are known to contribute to coeliac disease risk, yet only a small fraction of people with a high genetic risk for coeliac go on to develop the disease. This leads us to believe that environmental factors, including diet and microbiome composition, play an important role in determining whether or not an individual develops coeliac disease.

The role of gut bacteria

An obvious important dietary factor is the presence or absence of gluten, but in what way could the bacteria in your gut, modulate your chance of developing coeliac disease? There are, in fact, several possible answers to this question.

To get an idea of which bacteria are relevant in the context of coeliac disease, I am comparing the gut microbiome composition of coeliac disease patients with that of healthy controls. To this end, as part of the Celiac Disease Northern Netherlands (CeDNN) cohort, stool samples were and are being collected from both patients and control individuals. We isolate bacterial DNA from these stool samples and, by means of DNA sequencing, determine which bacterial species are present. After preliminary analyses of these data we can already confirm that coeliac disease patients have a higher abundance of Escherichia coli (reported to increase intestinal permeability) and a lower abundance of Bifidobacterium longum (reported to decrease permeability) than healthy controls.

Based on these analyses we will generate a list of bacteria and/or bacterial products suspected to have a role in coeliac disease onset. These bacterial suspects can then be added to the human Gut-on-Chip device being developed by two PhD students in our lab, Renée Moerkens and Joram Mooiweer. In this device we can create a miniature version of the human intestinal barrier using cells derived from urine or blood of patients or healthy controls. Using this cutting edge technology, we can combine the genetic background relevant to coeliac disease with specific bacterial triggers and study how these two factors interact.

If you want to stay up to date on our progress you can follow us on Twitter (@nociorganonchip).