Rasmus, Lene and Ida B cells

My name is Rasmus Iversen and I am a researcher at the Department of Immunology. My main research focus is to understand how antibodies and B cells that react against transglutaminase 2 are involved in the development of coeliac disease. Our approach relies on isolation and characterisation of molecules and cells from biological samples donated by patients.

The T cell and B cell “handshake”

Yesterday, Asbjørn and Louise presented T cells as a key cell type of the immune system causing coeliac disease. T cells are dependent on receiving signals from other cell types and can only recognise gluten when fragments are presented on HLA-DQ2 or HLA-DQ8. Our recent findings suggest that B cells can be involved in presenting the gluten fragments to T cells and that this contact between T cells and B cells may drive disease development. The outcome of this “handshake” between T cells and B cells is mutual activation of both cell types, leading to release of molecules that cause inflammation from the T cells as well as antibody production by the B cells. This model can explain the link between coeliac disease and antibodies against transglutaminase 2.

Different flavours of B cells and antibodies 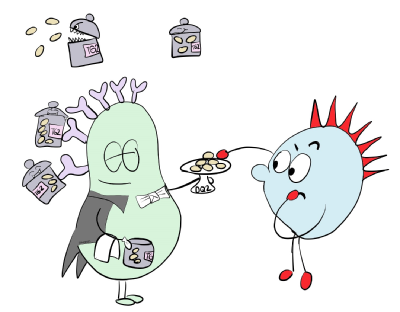 By studying the antibodies produced by B cells, we have discovered that not all antibodies to transglutaminase 2 are the same, since they can attach to different parts of the protein. Many of the antibodies bind preferred areas on the transglutaminase 2 surface, and the B cells that make such antibodies are best at stimulating T cells. We have also seen that production of these antibodies occurs with the onset of coeliac disease and tissue damage in the gut. Based on our results, we believe that you need to engage certain types of immune cells, both on the T cell and B cell side, to develop coeliac disease. The potential for targeting such cells with therapeutics may open new possibilities for treatment.

B cells go through several developmental stages before they start making antibodies. We are currently trying to characterise all of these stages in order to understand how the antibody production starts and where T cells and B cells meet. At the final stage, B cells accumulate as so called plasma cells that sit in the gut wall and produce large amounts of antibody. 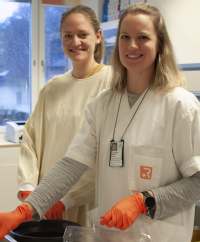 We are Lene Høydahl and Ida Lindeman, a Postdoc and PhD student working in Ludvig Sollid’s group. Our research interest is the late stage B cells, called plasma cells, which produce antibodies against transglutaminase 2 and gluten in people with coeliac disease. Specifically, we are interested in understanding if and how plasma cells contribute to coeliac disease - we suspect that plasma cells have other functions besides antibody production!

To learn more about these cells, we have isolated and analysed plasma cells from gut biopsies of people with coeliac disease and studied their transcriptomic profile (ie which genes they express) and which molecules they have on their cell surface. This gives us important clues about their function.

Our current theory is that plasma cells also act as antigen presenting cells for T cells and that they can be important to keep the T cells activated in the gut in coeliac disease. Our future research will explore this in more in detail. If B cells and plasma cells have important roles as antigen presenting cells in coeliac disease, targeting these cells offers a new potential treatment strategy.