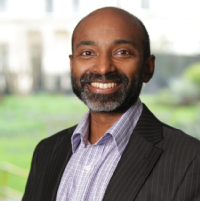 Professor Ramesh Arasaradnam is a Consultant Gastroenterologist at University Hospitals Coventry & Warwickshire and clinical academic at universities of Coventry, Leicester and Warwickshire. His research interests are in inflammatory conditions within the gastrointestinal tract and the application of non invasive technology for early disease diagnosis.

What was the main issue your research was seeking to address?

We aimed to study the ‘chemical signature’ of cells and gut bacteria in people newly diagnosed with coeliac disease, and then observe any subsequent changes six months after being established on a gluten free diet.

Our hypothesis was such changes in the gut bacteria may explain, at least in part, why some patients with coeliac disease do not feel better despite being on a gluten free diet.

What were you hoping to find out through this research?

We were hoping to identify ‘chemical signatures’ in people newly diagnosed with coeliac disease, which might then alter/normalise after being established on a gluten free diet.

We were hoping to find these changes using non-invasive methods ie with a urine test.

Secondly, we were hoping to show that this change in chemical signature mirrors the change in gut bacteria pattern before and after commencing a gluten free diet.

How successful was the project in achieving this?

We demonstrated that with a urine sample we can detect differences in the chemical signature pattern before and after starting a gluten free diet within the same individual. This is important as effectively we have a simple test (urine) that can potentially track a patient with coeliac disease throughout the course of their condition.

We also showed that the gut bacteria in those who were established on a gluten free diet altered to become a more ‘normal’ pattern.

How will this project benefit patients?

These findings are novel and set the scene for further detailed studies on understanding what happens to those with coeliac disease, who then commence a gluten free diet and respond at the cellular level, as well as what happens to their gut bacteria.

How has the funding from Coeliac UK made a difference?

It has brought us another step forward to having a greater understanding of coeliac disease. There is potential for a new, non invasive, test to monitor changes after adopting a gluten free diet and an opportunity to further explore how changing an individual’s gut bacteria may help with ongoing issues.

What are the next stages for this work?

There are several avenues that we can pursue: