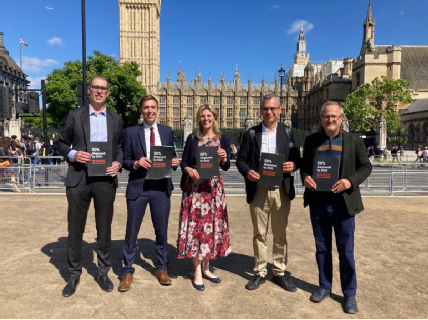 Coeliac UK has called for MPs and peers to support greater action to improve diagnosis of coeliac disease.

Among many startling facts, the report highlighted that despite 1 in 100 people having coeliac disease, nearly two thirds of those with the condition in the UK – half a million people -  remain undiagnosed. As a result, they could run the risk of long term associated conditions such as osteoporosis, neurological dysfunction, fertility problems and in rare cases, lymphoma and small bowel cancer. Delays to diagnosis are a significant challenge, with it taking on average 13 years for an adult with coeliac disease to attain a diagnosis.

The event was hosted by Dr Jim Shannon MP with support and attendance from MPs from across the political spectrum. Alongside the recommendations laid out in the report was a commitment from those present to pursue the re-establishment of an All Party Parliamentary group on coeliac disease in Westminster. Made up of representatives from various parties, these groups come together to pursue a topic or shared interest and can provide a platform to drive policy change in parliament. Coeliac UK has supported such a group in the Senedd Cymru/Welsh Parliament and hopes to establish equivalents across the UKs four parliaments.

We would like to put on record our thanks to Jim Shannon MP and Virendra Sharma MP in particular for their support on the day as well as all those MP staff that joined to share their own stories. We look forward to pursuing the report’s recommendations in partnership with our parliamentary champions in the coming months.

Back to news listings